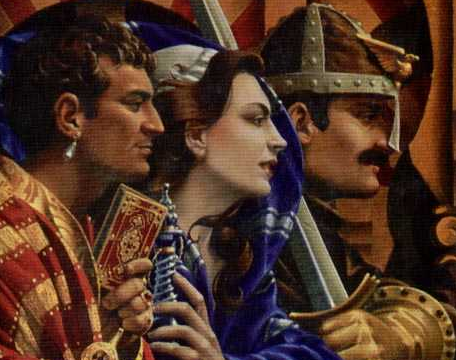 The Lions of Al-Rassan, by Guy Gavriel Kay

Lions of Al-Rassan is one of the best fantasy books I’ve ever read, and I say this even though I’m not entirely convinced it is fantasy.

Whatever its genre, it tells the tale of Moorish Spain and events leading to the Reconquista, but through the lens of the fantastical. The major powers and players are sufficiently mixed up and layered with new details to make it clear this is not earth (there are two moons in the sky!) and it’s not a historical account , but things are also immediately recognizable, even as an American. Instead of Christians, Muslims and Jewish peoples, you have the Jaddites, Asharites, and the Kindath – with all the same customs, stereotypes, challenges, and desires. It’s a little weird, to tell the truth, but more on that later.

Thankfully, it is much more than just a fantastical retelling of Cantar de mio Cid. At the heart of Lions of Al-Rassan are the lives and personal stories of impossibly powerful, emotional, and clever men and women. There’s The Captain himself, Rodrigo Belmonte, a genius tactician and leader of the strongest band of Jaddites on the peninsula. Opposing, or allied, with him is Ammar ibn Khairan, an Asharite poet, advisor to kings, killer of kings, and lovable rogue. Finally there’s the woman that stands between them, Jehane bet Ishak, a Kindath doctor whose life is defined equally by love, war, and medicine.

These three heroes are the pillars of the book, with themselves and the people that follow and love them serving as a metaphor for the mishmash of cultures and the inevitable conflict arising on the peninsula itself.

Al-Rassan is a ticking timebomb of external pressures and irreconcilable differences, but there is a compelling argument made by its characters that it doesn’t have to be. There’s a dream shared by many characters that conflict is not inevitable, that it is possible to blend disparate cultures (in some cases quite literally) to create something new, better, but fragile. This struggle is the source of its many emotional highs and lows.

I don’t think I’ve ever read a more human book, especially in the fantasy genre. Characters frequently stop and appreciate beauty, celebrate companionship, weep at tragedy, and profess respect for their friends and rivals.

The key here is that, with few exceptions, there are no evil men. There are competing and incompatible cultures, religions, and political systems, but humans are human, and their shared likenesses are as important as their differences. These are crafty and intelligent men having crafty and intelligent conversations with each other, even in conflict. You end up sympathizing with everyone, even going so far as hoping, naively, that they somehow all get what they want.

They won’t, of course. One of the greatest themes running throughout the book is that these men would be great and lifelong friends if not for just one small problem – the tragedy being that these “small” problems are often the most defining parts of their lives.

It is a nearly flawless book, though there are a few problems I couldn’t get past.

I’ve read plenty of books that straddle the line between fantasy and historical fiction, but this is the first time it’s been a source of distraction. Events and characters are so close to their real world counterparts – often with comically referential names, titles, or descriptions – yet at the same time are very clearly not.

I kept wishing that the book fully committed to fantasy or history.

Take the three major religions as example. Going by their descriptions, you’d likely say they are sufficiently fantastical: the Jaddites worship the sun as god, the Kindath worship the two moons, twin sisters of the sun god, and the Asharites worship not the gods but the stars and the human prophet who preached their glory.

And yet when you read of their cultures, practices, and so on, you’ll quickly find they are literally Christians, Jews, and Muslims. The Kindath (Jews) are called the Wanderers, valued for their skills and trades when times are good, but immediately blamed, persecuted, segregated, expelled, and labeled as sorcerers and baby eaters when times are bad. It’s not subtle!

It’s also not a bad thing, necessarily, because the fantastical framing is as good of a teacher as any historical drama would be. And yet… it remains distracting, taking me away from its world and putting me back in my own.

More distracting are the names of its characters: Rodrigo “The Captain” Belmonte is of course El Cid himself, Rodrigo “The Lord” Diaz. The character of Ammar ibn Khairan is based on a man named Muhammad ibn Ammar. A major city in the book is named Silveness (Seville), ruled by the khalifate (caliphate), which eventually falls and is replaced by the Almalik (Almoravid) dynasty.

Both book and reality contain a Sancho the Fat, yet they are different people… sorta?

On more mundane annoyances, there are a number of writing ‘tricks’ that Guy Gavriel Kay goes back to a few too many times.

Often – too often – there will be a scene in which an important event is viewed through the perspective of one of the characters. It will then end on a cliffhanger – like a character’s death, not yet named – and then the perspective shifts. Sometimes the cliffhanger is resolved, but more often than not this trick happens a 2nd or even 3rd time, or the time frame jumps suddenly and you’re left to infer what happened before the book eventually just tells you.

The writing is very clearly aware that it’s dangling the reveal in front of you, and it’ll purposefully lead you down false conclusions to stretch out the tension even more. Once you notice the trick it’s hard not to get impatient or even frustrated by it.

There are also a number of repetitive words and phrases that grate after a time – people can only talk about “dissembling” or “diverting” so many times before it becomes irksome – but they’re minor.

Indeed, all of its problems and distractions are minor when compared with the work as a whole. They are primarily noted only because the rest of the work is so phenomenal that even the smallest error stands out of place.

It’s a remarkable book, one that should be on the shelves of every fantasy fan, and it’s made me a Guy Gavriel Kay for life. Just don’t read it too close to taking a test or quiz on the history of Spain, because it will cause you to fail spectacularly.