It’s been a while since I’ve done a Games of the Year, but with Village Monsters released and no travel for the holidays I finally had time to tackle it again.

Here are some selected games of this year that I enjoyed.

Best Game that Should Have Been Bad But Wasn’t

It’s impossible to overstate how bad Days Gone should have been. A zombie game… that’s an open world… with survival elements… and cover-based shooting. Uh huh. Was this game designed via a Markov chain?

But it works. It all works. Much of it is held together by Deacon St. John – an utterly fantastic protagonist that realistically depicts a shattered man in a depressing situation.

The lore is incredibly cool, the story is way longer and more interesting than you’d expect, and the gameplay holds up for the entire length. I really couldn’t have asked for anything else.

Worst Game that Should Have Been Good But Wasn’t

In many ways The Outer Worlds is the bizarro version of Days Gone: on paper this should have been an absolute hit. I mean, the makers of the “good” Fallouts getting together to make their own universe free of the constraints of publishers? That seems mathematically impossible to screw up.

And yet screw up they did. They told a story about evil capitalists yet settled on a message of “eh, could be worse”. They created a world with lore that was at best overwrought and at worst nonsensical.

The companions were hot garbage, world reactivity was nonexistent, and the gameplay was somehow even worse than all of that. And the end of the game… holy crap. How did this game even get approved for release?

At least the title screen had cool music.

The “Confirmed By Hideo” Award

Death Stranding is not the best game I’ve ever played, but it certainly is the most compelling.

Part of me hated this game before it even released. Kojima isn’t the easiest guy to root for at times, and it was hard to tell how much of the game was genuine and how much was a “let’s see how much money we can blow on actors and weird shit.”

But it was in fact completely genuine from top to bottom. The story, the gameplay, all the social aspects – ugh, I loved every moment and cried like a baby when it was done.

It’s impossible to be cynical about Death Stranding.

My Time at Portia

Runners Up: Ys 8: Lacrimosa of Dana, The Messenger, Yakuza 0

It’s not easy to blend genres together, particularly when said genres are tricky to do on their own. Yet Portia somehow manages to do so repeatedly.

This one game is part Harvest Moon, part Minecraft, part Factorio, and part free-to-play MMORPG from the early 2000s.

I can’t say Portia handles all these blends masterfully, but it’s still an extremely good effort and a very addicting game. It was constantly surprising me until the very end.

Game I Most Regret Not Playing

Every time I remember The Outer Wilds is an Epic exclusive I get sad all over again.

One day I shall play what seems like an absolute banger of a game, but it’ll be whenever that dumb exclusivity period ends.

Game of the Year

I have played 315 hours of Fire Emblem: Three Houses. That’s a lot.

I have killed hundreds upon hundreds of bandits, beasts, and a dragon or two. I have watched something like 100+ relationship cutscenes – often multiple times due to multiple playthroughs – and I’ve never once skipped one.

Three Houses is a top 10 game of all time for me. The gameplay loop is expertly crafted, the voice acting is maybe the best I’ve ever heard (respective to its size), and it’s just so much god damn fun. Is it too much to hope that every Fire Emblem from here on out mimics this Persona-esque formula?

All I know is that I wish it never had to end. btw Edelgard did nothing wrong. 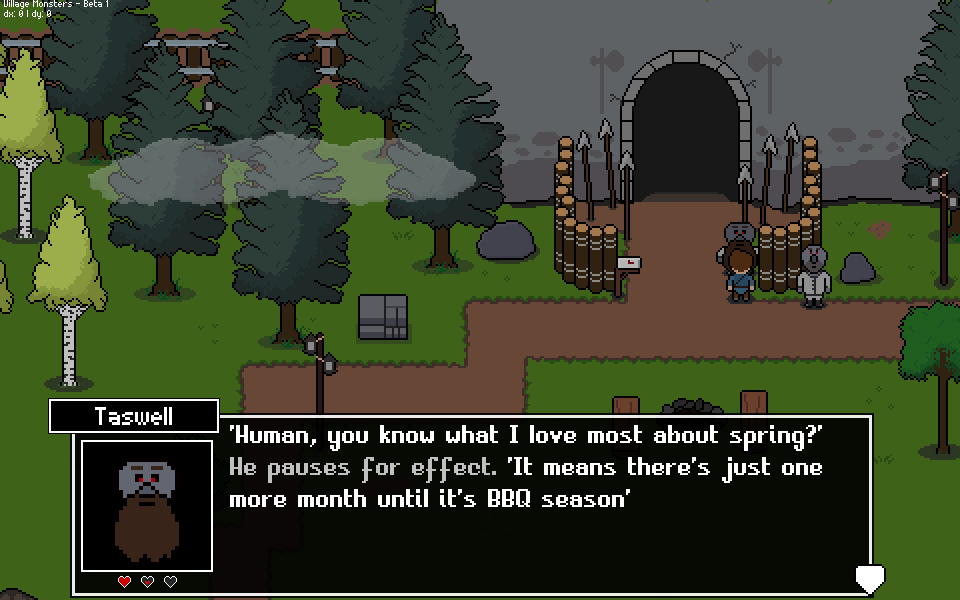 This Building a Village ​will be a little different than usual. Instead of recapping the past week’s work, I want to do a deep dive on the single most important feature of Village Monsters – its dialogue system!

Each kind of game values dialogue a little differently, but it’s the real bread-and-butter for a life sims like Village Monsters. Yet despite its importance, it’s often a double-edged sword that can end up doing more harm than good.

When dialogue start falling apart – getting too repetitious, too predictable, or maybe even too generic – it is often a death sentence for life sims. After all, these are games that value building immersive relationships with NPCs, and there’s no quicker way to ruin that then to feel like you’re talking with a boring robot.

There are certainly many ways to deal with this problem: some designers prefer having strict control over the script. Others may prefer using “adlib” style conversations to give the illusion of infinite content.

For Village Monsters I wanted to try something new – and this post will talk about what I’ve done. 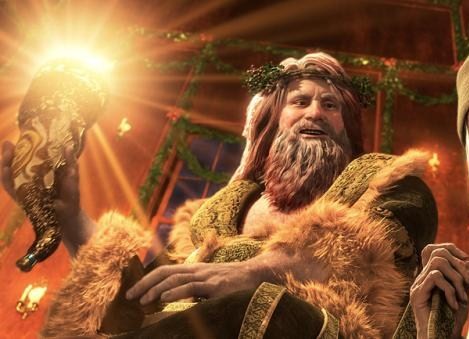 Video games, to be specific. Seems like nary a year goes by without seeing a release or two that are rather quite good.

I had originally made this post to talk about my game of the year. It’s always a fun to think about and, hey, everyone is doing it.

So I began scrolling through the releases this year and compared it to the games I played. It only then that it hit me:

Clearly I know that a ton of good games came out this year. I just…never…actually got to any of them?

That doesn’t even seem possible. Surely I played at least one of them, if only by accident. Like, maybe I fell onto a controller and began to play Dark Souls 3…?

Turns out that the games I played – the good games, GotY contenders, anyway – were largely from last year. Or the year before that. Or like 20 years ago.

Well, this is going to be awkward, huh?

WARP DOGS’ GAME OF THE YEAR,

(ASSUMING IN THIS CONTEXT “OF THE YEAR” REFERS TO WHEN I PLAYED IT,

NOT NECESSARILY WHEN IT WAS RELEASED), 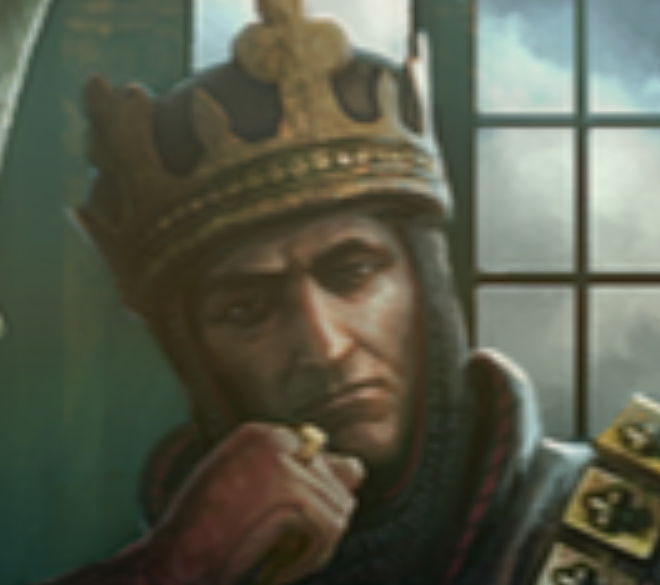 If you sat me down in front of some very smart, very capable game designers and asked me to describe my perfect game, the end result would have probably still been less enjoyable than the Witcher 3.

It nails the humor and tone I want to see in video games. It absolutely crushes it with the world and the efforts it goes to build it up into something real. The story is fantastic. The combat is fantastic. Geralt – fantastic. All the characters – fantastic.

Quests? Otherworldly. They’re all so good. Every single one of them – in the way they subvert your expectations, in how they play with your emotions, the themes they explore, the callbacks to the most obscure lore and myth. 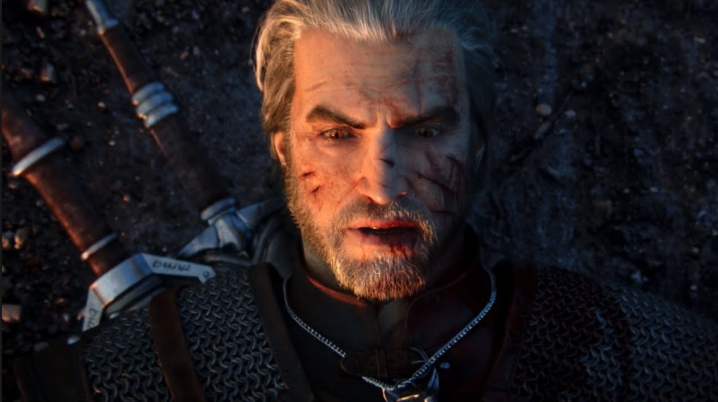 It’s also gigantic, but always in the right amount. It’s open world without quite rubbing your nose in it – no towers or minigame icons and checklists.

Don’t get me wrong, I still wanted to complete everything, explore everything and, indeed, check all the boxes. The difference is that it was always on my terms.

I did it because this world, these characters, deserve help. I cared. I did it to see the next thing – it was like Civilization’s “one more turn” syndrome, only it was the entire game.

What more can even be said about this game that hasn’t been addressed by countless others much smarter than I?

All I know is that as a game designer I am at once in awe and jealous of this world. There’s so much to be inspired by in the Witcher – not just 3, but the entire Witchering series generally – and I am overjoyed that they exist and are successful.

There are few games out there that can be said to have improved the entire industry by just existing. The Witcher 3 is absolutely, without a doubt, one of them.

Anyway. The Witcher 3: didn’t release this year, but gosh darnit it is easily my Game of the Year 2016 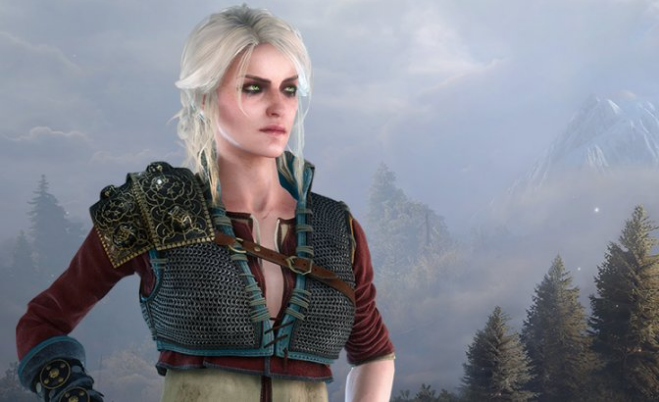 I’ve dreamed about quitting my job and making indie games for half a decade now. I’m an escapist by nature, and thoughts of sitting at home making and play games all day sounded absolutely wonderful

What’s stopping me? Well, “life”, I suppose…there’s always some big expense or reason not to quit, and my responsibilities grow each year. No one wants to hear about the boring life of someone with suburban angst, so I won’t keep going

This time around I’ve pledged to at least dip my toes in the water – thus this site, this project. Small dips of the toe. Testing the waters. Mixing metaphors. That type of thing.

However, the world is very different than it was 5 years ago. The idea of a single developer creating a cool game that’s enough to sustain them was possible then, if not entirely probable. Nowadays? The competition is much, much stiffer in the indie world. I’m seeing games labeled as indie with cutting edge graphics, 10+ team members, and a big boy budget.

Worse, I’m seeing ideas very similar to my own. They can execute better by sheer numbers alone

Last night I felt down. Today I feel less down, and a bit inspired in the way an ant must feel when taking on preying mantis. I cannot imagine an ant would ever take on a preying mantis in the wild, but just imagine how pumped up he’d be. What’s he got to lose, you know? And if he wins?

Yeah. So my expectations for myself have been deflated, but it’s resulted in a boost to my confidence. Weird how that works.

Anyway. Back to work