There’s a lot to do in an average day in Village Monsters – activities range from as the mundane, like shopping or talking with villagers, to multi-stage quests, odd jobs, and even exploration.

However, the most involved type of activity is called a Hobby. Hobbies are generally ‘slow burns’ that you’ll work on each day, and they require effort, upgrading equipment, and leveling up skills. Thankfully, the rewards – like cash and items to donate, use or display in your home – are also greater than other activities.

In the prototype you can actually play with two such hobbies: critter hunting and fishing.

This week I’m working on a 3rd hobby: Archaeology! (Like most things the name is subject to change)

You’ve probably already guessed this by the name, but this hobby involves a lot of digging around. As you wander the village and surrounding areas you may find a digable spot in the ground marked by an obvious red “X” – you can then take your shovel to dig up whatever is buried there.

Most of the time it’ll be things that you’ll want to sell off, but sometimes you’ll get lucky and find rare treasures. You may even find the remains of ancient mythological beasts and other monsters that can be donated to the Historical Society, displayed in your home as a trophy, or sold to the very curious (and very insane) scientist that lives outside of town.

But perhaps the best thing to find in the dirt isn’t a treasure at all, but rather: a map! These special items are each the start of a unique treasure hunt quest that can span several days or even weeks in the game.

Each hunt will require you to solve riddles, find specific landmarks, or explore long-forgotten ruins, and some may even require help from other townsfolk.

The rewards are worth it, though: the treasure you find on your hunts will often be unique items with powerful abilities, like a book that can let you talk to ghosts, or a rod that can control the weather.

One last thing! Not too long after starting the game you’ll have the opportunity to get a dog companion. This pup isn’t just for playing with, but is also able to help you out in various daily activities.

I’m still working out the details with how this works with the other hobbies, but for Archaeology I’m leaning toward allowing the pup to find digable spots on his own and dig ’em up for you. Of course, he should probably fetch the items as well, but one step at a time, yeah?

I’m trying something new! That’s what working for yourself allows for, yeah? Pivots, baby!

Truth is, I was spending more time than I wanted to on these planning and retrospective posts. I mean, ok, it wasn’t that much time, but it was always something I kept putting off and putting off, and then when I actually did do it I always half-assed it.

I won’t get rid of the concept entirely because I think it’s important to my psuedo-agile approach, but I am combining the two. This new thing will go out each Sunday (except for, uh, this first one?) and it’ll look exactly like the Planning posts with the addition of a Show & Tell section. I’ll also try to weave in last week’s successes (and many failures) into the Goals. Ok, cool? Cool!

Not much to report on the biz side of things. The prototype release Flower has been out for about a week now, which is rad! Everything else is on schedule.

The latest prototype contains two hobbies – critter hunting, and fishing. Since the start I always envisioned three primary hobbies, and this week marks progress in that 3rd one: archaeology!

This’ll be the most involved of the hobbies, and includes things like digging up jewels, finding treasure maps and clues leading to even greater treasure, finding the remains of long-dead ancient creatures…there’s a lot!

More importantly, this hobby has the most ties with other systems of the game – like seeding the ground with things to dig up each new day, or adding new quests to the Compendium if you dig up a map, and so on. As such, focusing on something like digging will end up improving a whole lot of systems as I work through them all – it’s like five or six birds with one stone!

IT’S NOT BUILT FOR SHOES

This was a pretty lousy week, if I’m honest. You ever have one of those days where it feels like you do a ton of work, only to you realize you don’t have a whole lot to show for it? Imagine that, but it’s all week, and you have an idea for how it went.

Dunno why, really, just one of those things.

This coming week includes a full moon – meaning a new release! – and I’ve felt completely taken by surprise. Has it been a month already? What the hell! Only 4 days to go…so, I best get back to it. 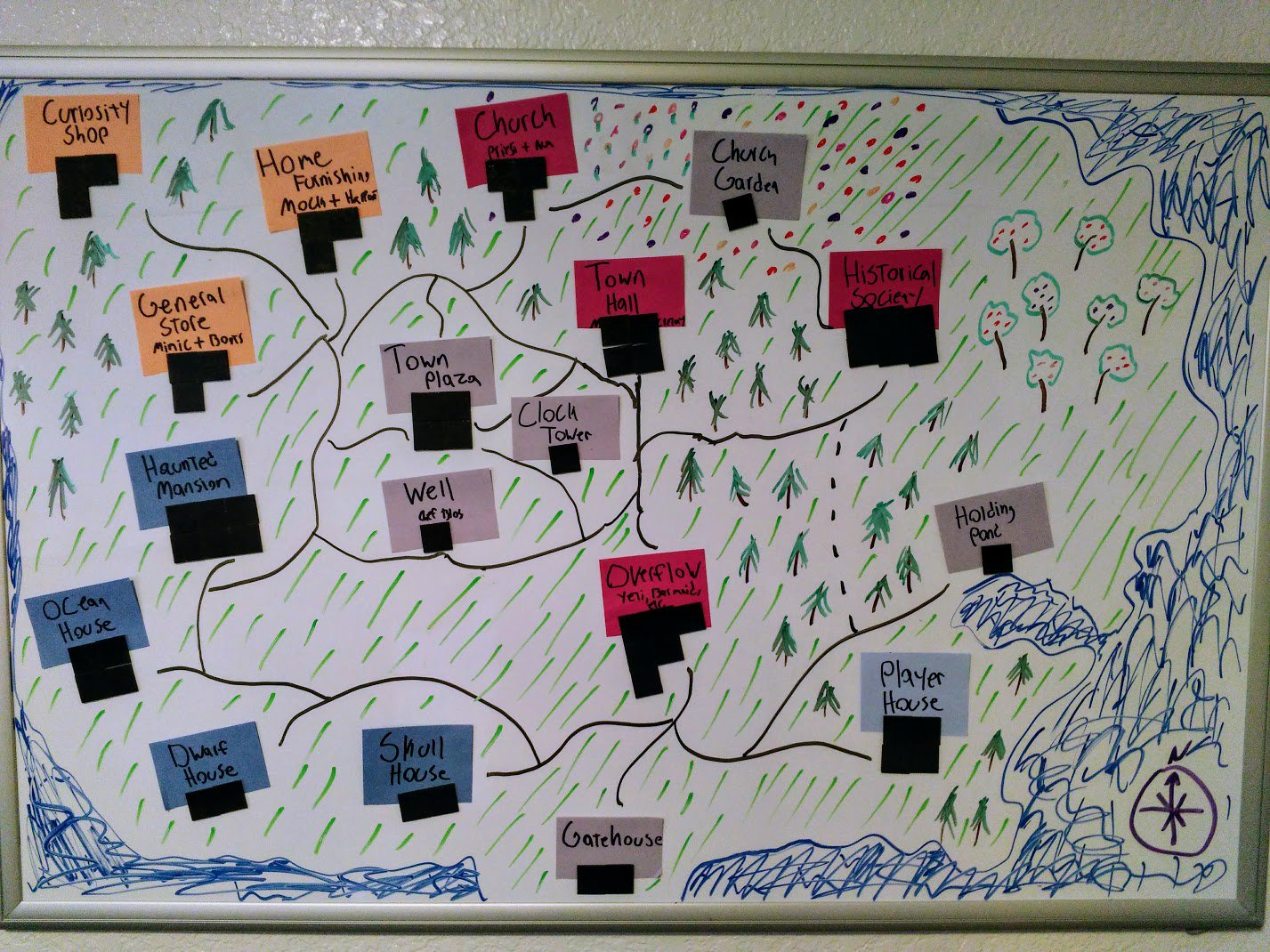 IT’S NOT BUILT FOR SHOES

Not much new to add on this front – money is continuing to be spent, but not too much. We still have just under a year to figure this stuff out, and I’m still feeling confident we will.

For the first time in like a decade we’re getting a tax return back, and its substantial enough to make a blip on the ol’ WARP CORP charts above. That’ll come some in the summer. Between that, various retirement accounts and other sources of income, I think I’ll be able to keep on trucking until an eventual plea for money in the form of a Kickstarter. Ah, but before that I need a game worth backing, right? Well stop making me type this and let me get back to it!

I have a few different analysis-related goals this week. I’d like to get together a “Lore Bible” of sorts – for myself! I’m picturing an Excel sheet of sorts that lists every character, their personality, relationships, places in the world, and so on.

I’d also like to finish up the public roadmap that I’ll be sharing over Trello – I’m committing to getting that out this week, actually, so look forward to that.

On the coding front the plan is to continue with ‘core loop’ items. This week I’ll definitely focus on player housing including furniture placement, upgrades, and lots more. Finally finally, I’d like a more robust dialog system (one fed via an external file instead of the hardcoded version I have now)

It was another good week. I’m switching some things up on both the development and story fronts.

I’d like to make my development even more open than it already is. To this end, I’m moving off of KanbanFlow and back to Trello which has more robust ways of sharing things. The idea is to make my entire roadmap public so that you can look at what’s implemented, what’s coming up, and you even vote on things you think are most important. 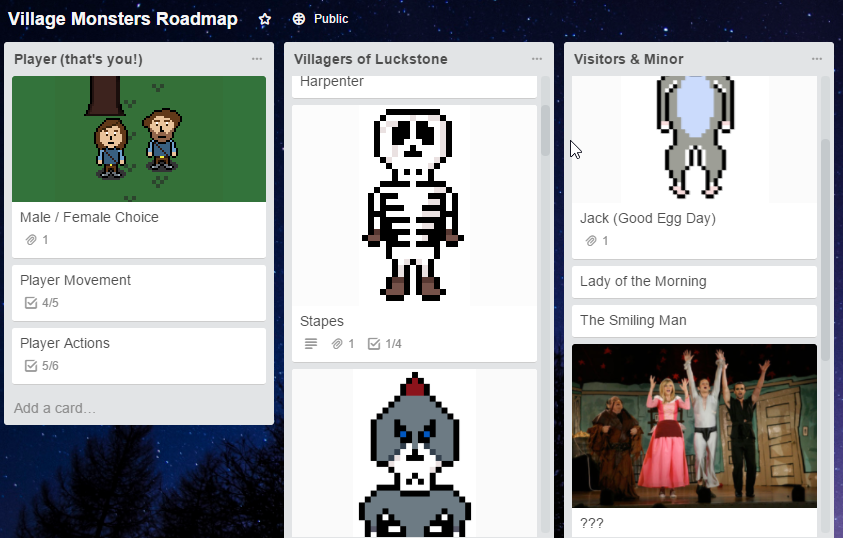 On the story side of things I’ve been rethinking some of the themes and overall tone I’m going to explore. Nothing much I can talk about now, but in short: things are going to be more fun and less gloomy.